At a time where we are all struggling to comprehend the human, social and economic cost of the coronavirus, we will be providing regular ‘flash estimates’ based on our modelling of the performance of client and trust portfolios along with updates and interviews from our contributing discretionary investment managers.

Flattening the Curve: Lessons from Asia 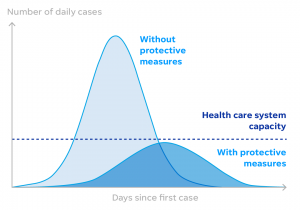 As much of Europe is now in the eye of the storm and the UK and US brace themselves for the tsunami to come, investment managers are looking to Asia to understand the infection’s likely progress. The draconian restrictions imposed in China and South Korea, supported by aggressive testing and compliant populations, have all but stopped the progress of this virus as Christopher Macklin, a Partner at James Hambros explains; “The decline in the number of new infections in China and Korea suggests that the coronavirus can be contained provided that governments are both able and willing to impose severe quarantine or social distancing measures on their own citizens. It also requires citizens to follow their governments’ advice.” However, we are yet to see how well these measures translate to western societies where ‘compliance fatigue’ could still frustrate government efforts to ‘flatten the curve’. As Macklin continues: “Initially we doubted that any other country had the ability or political appetite for a China-style lockdown but recent events in Italy show European governments are willing to try and US policy is hardening.” It is still early days, he continues: ‘If the US and Europe emulate the Asian response, we should expect to see a peak in the number of cases within three to four months of the first infection. Working to this timeline suggests an improvement by the end of May.”

This sentiment is echoed by Credit Suisse from a call hosted by the Chief Investment Officer for International Wealth Management, Nannette Hechler-Fayd’herbe:“the extreme measures implemented in Asia to contain the outbreak delivered remarkable success in slowing and controlling the epidemic. The idea that this outbreak will persist for years is clearly incorrect.” She goes on to explain that whilst this is a very powerful negative disruption, it will be short term.  Hechler-Fayd’herbe says that “After a poor February and March, business surveys in Asia may show as soon as April that they have passed an inflection point. That will be important for markets. While it may not be the inflection point for the global economy, it will show us that there will be an inflection point.”

Governments are unlikely to relax restrictions until the so-called basic reproduction number (‘R0’) falls below 1. This key indicator tells us, on average, how many people someone with the virus will infect as Peter Musker of Brooks MacDonald explains: “The key indicators for duration are the daily infection statistics and the pace of change over the last few days, these have stabilised in some of the most affected European countries but are yet to slow significantly.” Musker says he will look to the Chinese experience to model a likely turning point for this virus. “Once this is known, the economic impact can be estimated based on the slowdown in China earlier this year adjusted for the actions by governments outside of China.” Indeed recent numbers give reason for some hope according to Musker: “News flow on coronavirus also marginally improved with signs of a slowdown in the rate of infection in Italy as well as news that a drug already in existence, chloroquine, has been approved by the FDA for clinical trials to combat COVID-19 in the US.” The situation in Europe is bleak but the lesson from China is clear; provided everyone plays their part there is no reason why we cannot turn the tide. In the meantime, we keep a close eye on the daily data for clues as to when that is likely to happen.