Many people think of investing as being a rational, logical process. However, investment decisions are subject to the biases and emotions of the people who make them. It is therefore important for investors to be aware of their preconceptions, to better understand how they can affect their decision making.

There are a huge number of biases that can be detrimental to investors’ decision-making processes, but these can generally be grouped under one of two different headings. Firstly, cognitive biases are those which arise because of a lack of knowledge, poor information processing or memory errors. Secondly, emotional biases are those which are the result of an investor’s feelings, impulses or intuition. These behavioural biases can cause investors to make mistakes, but because of this they also create market inefficiencies from which others can profit. In the first of this two-part article, we look at some of the common cognitive biases and what can be done to avoid them. 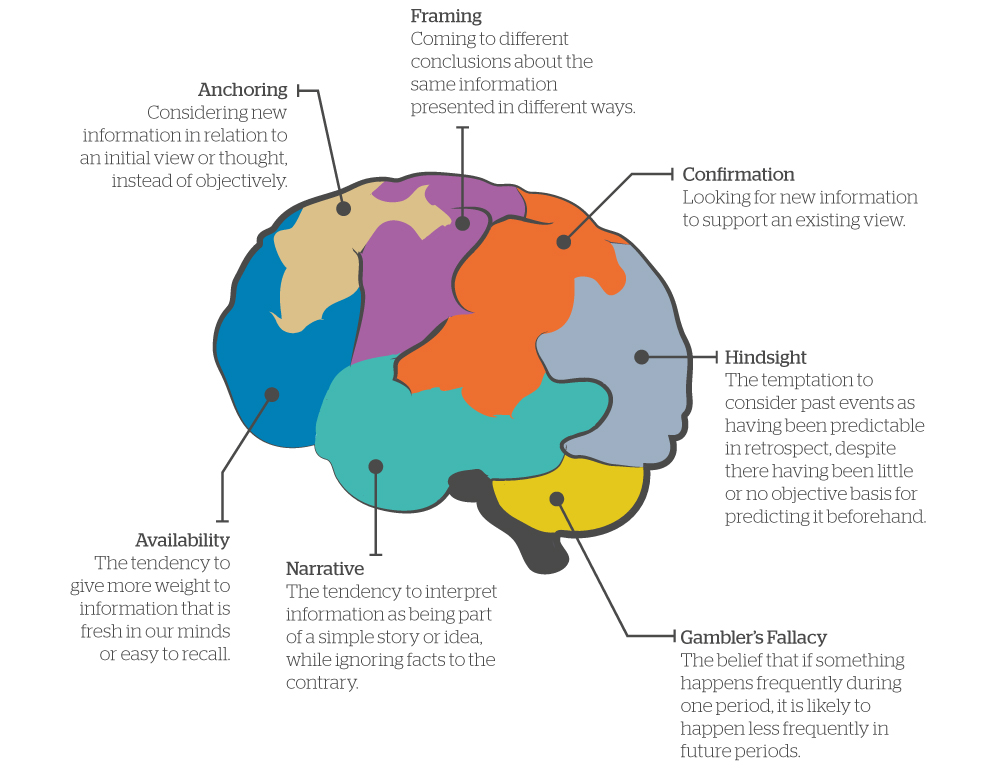 Availability bias: The tendency to give more weight to information that is fresh in our minds or easy to recall. An example of availability bias relates to the fear of all-time highs. As equity-market crashes have historically occurred at times when markets have been at all-time highs (for example, before the Dotcom and Sub-Prime crashes in 2000 and 2008, respectively), investors tend to associate the phrase “all-time highs” with the bursting of asset bubbles. However, it is far more common for markets at all-time highs to carry on rising. In fact, all-time highs are a common occurrence. Since 1927, the S&P 500 Index has closed at a new all-time high around 1,100 times, roughly once in every 19 trading days.

Anchoring effect: The tendency to rely too heavily on the first piece of information offered. A common trap is investing in stocks just because they have suffered large price drops, without a sound fundamental basis. Previous high prices cause investors to believe the stock now represents good value; however, share-price declines often represent deteriorating company fundamentals. By employing a robust, ongoing investment process, investors can mitigate the impact of the anchoring effect on their portfolios.

Framing: Coming to different conclusions about the same information presented in different ways. Studies show that risk-averse investors are more likely to invest in portfolios that are presented in terms of historical returns and volatility, rather than the probability of losses. When choosing investments, it is important to focus on their underlying characteristics and not inconsequential cosmetic factors.

Confirmation bias: Looking for new information to support an existing view. After buying a stock, investors often selectively remember positive articles or research notes about it, while ignoring negative news. It has also been shown that the stronger the opinion, the stronger the tendency to seek out confirmation and ignore disconfirming evidence. However, it is often more useful for investors to actively seek views which oppose their own, as this can help them avoid loss-making investments.

Hindsight bias: Overestimating what could have been known. It is the temptation, after an event has occurred, to see the event as having been predictable, despite there having been little or no objective basis for predicting it. Many professionals overestimate the success rate of their past decisions, as it is easy to overestimate how predictable an event was after it has occurred. This can cause investors to take too much risk in the belief that their historical decisions were better than their results demonstrate. It is important for investors to embed appropriate risk controls into their investment process to ensure that their portfolios do not suffer from hindsight bias.

Cognitive biases arise because of a lack of knowledge or understanding and as a result can cause investors to make mistakes. Because of this, they also create market inefficiencies from which others can profit. In the following section we look at emotional biases which are the result of an investor’s feelings, impulses or intuition. 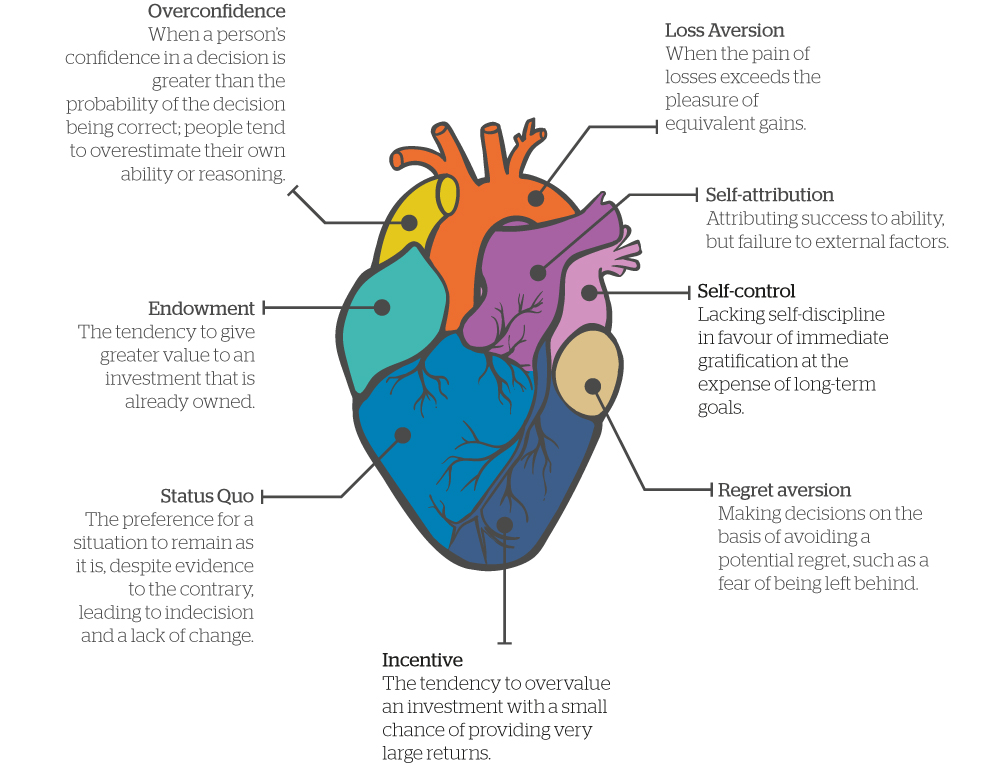 Overconfidence bias, on the other hand, arises when a person’s confidence in their decision exceeds the probability that the decision is correct. For example, when students in the US were asked to compare their driving skills, 93% rated themselves as ‘above average’. However, teenagers are twice as likely to have accidents as motorists in their 30s and six times as likely as those over 50! As a result of overconfidence investors can overstate their abilities due to early successes, which may be due to luck, and in turn, can lead to harmful risk-taking and overtrading.

Self-attribution bias. Studies have found that investors tend to credit successes to their abilities but their failures to external factors. This leads them to become overconfident and overtrade, adversely impacting their future performance. Investors should determine what has driven their past performance so that they can adjust their investment processes if and where necessary.

Endowment bias occurs when we attribute greater value to things we already own or know. In a famous study of the endowment effect involved participants being given a mug and then offered the chance to sell it or trade it for an alternative of equal value (a pen). The authors of the study found that the amount of compensation participants wanted for the mug was approximately twice as high as the amount they were willing to pay to acquire it. As a result of endowment bias investors can become emotionally attached to stocks, and this can make them invest too heavily or hold on to them for too long.

Regret aversion: During the Dotcom Bubble, in a clear demonstration of ‘herd mentality’, many people invested heavily in technology stocks because they were afraid of missing out on the gains experienced by others. However, many of these investments made very little sense in fundamental terms and ultimately led to large losses when the bubble burst. To avoid the potential for regret, investors tend to gravitate towards stocks that they have made money on in the past while avoiding stocks that they have lost money on. In addition, stocks that have appreciated in value since a prior sale are associated with regret and avoided because of the missed opportunity of buying at a lower price. However, it is important to have a defined strategy and clear long-term goals; this will help avoid the prospect of making damaging short-term mistakes.

Status quo bias: The preference for a situation to remain as it is, despite evidence to the contrary, leading to indecision and lack of change. In politics, the incumbent officeholder is more likely to claim an election victory over new entrants. This is demonstrated by the fact that over 80% of incumbents seeking re-election in the US House of Representatives win. This can be seen when individual investors, favouring the status quo, do not update their investment profiles as they grow older, causing their portfolios to become too risky for their individual situations. As such, the process of suitability assessment should be ongoing.

How can biases be avoided?

While it is impossible to eliminate certain biases fully, some steps can be taken to minimise their effects. First, it is important to acknowledge biases so they can be corrected. Next, investors should establish a clear and well thought out investment philosophy, as well as robust processes that they can use to apply it. Because cognitive biases are based on faulty understanding or reasoning, they often lead to poor decision making. In general, investors should aim to moderate cognitive biases wherever possible. For example, conducting thorough investment research and evaluate subsequent developments objectively will help avoid anchoring and framing effects. While actively seeking out contradictory views, data and conclusions will minimise the likelihood of confirmation and hindsight biases.

At Brooks Macdonald, our investment philosophy and approach is founded on three key principles; to use a proven active investment process, to integrate effective risk management processes and to maintain a portfolio focus to ensure that suitable investment strategies are being utilised for each individual client. Each of these is intended, among other goals, to help minimise the adverse effects of any biases our investment managers might have.

This article first appeared in the STEP Journal in Sep/Oct 2019.